The Best of British is organised by Media 10, the organiser of Design Shanghai, and is supported by the British Consulate-General Shanghai, Department for International Trade (DIT) and the British Council. This year’s event has caught the tides of the upcoming China International Import Expo (CIIE), and in addition to the technology focused exhibition at CIIE, Best of British will present a kaleidoscope of the British life, aiming at building up platforms for businesses and trade exchanges.“China is one of our most important partners in trade and business,” said Lexie Morris, Head of Retail and Consumer at DIT. “We are busy preparing for the UK pavilion at the upcoming China International Import Expo, and meanwhile, we have been actively searching and trying to provide platforms for British brands to know and explore the Chinese market. Best of British is what we have been working on since 2017.” This year’s event features major brands from across the United Kingdom, transporting London’s West End, the biggest shopping district in Europe, to the heart of Shanghai. Together, they present the timeless “Power of the UK.”

The exhibition hall transports guests to the heart of London, with six featured onsite attractions spread out across the show, including the Fashion Catwalk, Taste of Britain Theatre, Village Green, the Culture Theatre, Cream Tea Pavilion and the VIP Theatre Bar. The four-day exhibition schedule hosts over 200 live events, including more than 50 musical performances, 40 world-class culinary showcases, and 40 fashion shows and panels and interactive discussions with over 100 different industry experts and specialists. Organised by the British Council, the Study UK Showcase 2018 opened its door to visitors at the Shanghai Exhibition Centre on 18 October 2018. During the four-day exhibition, UK higher education institutions and UK alumni will showcase their extraordinary creative achievements, presenting visitors with an entertaining and interactive experience.

This year’s Best of British visitors enjoyed a variety of classic and new British brands and innovative products. Purchase a Fulton umbrella, one of the British Royal Family’s favourites, or one of the West End’s trending Fox Umbrellas. DAKS, a 111-year-old couture company, showcased their tailoring services with signature classic British style and the world-renowned technology company Dyson displayed their latest collections of innovative technology products, like their hair dryer, vacuum cleaner, and the newly-launched smart home lamp. Enjoy Savile Row's Holland & Sherry’s couture, customised tailoring services on-site, or feel like a member of the Royal Family with a retro hairstyle by Kent and a team of local Shanghai stylists.

Organised by the British Council, the Study UK Showcase will also opened its door to visitors. During the four-day exhibition, UK higher education institutions and UK alumni will showcase their extraordinary creative achievements, presenting visitors with an entertaining and interactive experience. Garrard, the jewellery maker who is best known for customised pieces for the royal family, is bringing the model of The Cambridge Lover’s Knot Tiara to the show, a piece known for being passed on from Queen Elizebeth II to Princess Diana for her wedding.

The Culture Theatre is one of the most popular areas of the exhibition. Visitors lined up one hour in advance to watch the first day of live classical British theatre. This year’s featured performances include the Royal Shakespeare Company’s latest production of Macbeth featuring International Emmy Award winner Christopher Eccleston and Niamh Cusack, the Royal Ballet’s Alice’s Adventures in Wonderland created by Tony and Olivier award winner Christopher Wheeldon, distributed by ATW Culture and Trafalgar Releasing in China, as well as the exclusive 25th anniversary screening of Phantom of the Opera from the Royal Albert Hall, and the sequel Love Never Dies, composed by musical master Andrew Lloyd Webber. Leading lady Li-Tong Hsu (徐丽东) will perform selections from the Chinese version of Andrew Lloyd Webber’s classic musical Tell Me on A Sunday. Enjoy British arts and culture like a local Londoner, without having to fly to London.

In addition to the classic plays and musical performances, the China UK Film Festival hosted their opening ceremony at the ‘Culture Theatre’. Five films were screened and will be shown daily including: ‘Lean on Pete’, a 2017 Venice Film Festival Golden Lion Award nominee, ‘The Party’, shortlisted for the 67th Berlin International Film Festival's main competition, ‘Ethel and Ernest’ with a collection of Downton Abbey's best cast, the British independent film ‘The Finest’ and the romantic comedy ‘Brooklyn’. Guests can access all screenings with a single ticket. After high attendance at the first day screenings, visitors are encouraged to arrive early to secure their seat for the show.

Visitors will also get a chance to see STOMP, the world class British dance group known for their wow-factor shows. They’re bringing an extraordinary theatrical experience that will only be available to the Best of British visitors.

London Fashion Week at Your Doorstep

During the opening day, visitors also enjoyed viewing the latest fashion trends at the main stage of the Fashion Catwalk. The British Fashion Council, for the first time in conjunction with Best of British, brought a selection of 15 new cutting edge designers from London Fashion Week and London Fashion Week Men’s to Shanghai. Street fashion brands Boy London and Pepe Jeans London, the luxury bespoke brand Holland & Sherry, and independent pajama brand Not Just Pajama are just a few of the collections featured in this year’s shows. In a roundtable discussion between designer Lu Kun and several other fashion designers, the group shared their thoughts on contemporary British design, culture, trends and their own latest design concepts. Guests also watched a world-class fashion show, making many visitors feel like they were transported to the London Fashion Week scene, without leaving Shanghai.

The ‘Taste of British Theatre’ and ‘Cream Tea Garden’ are two of the most popular sections of the show. After a stroll through the booths, guests feel as if they’ve walked into a British aristocratic living room, straight out of ‘Downton Abbey’. British executive chefs including Edward Mair from the Four Seasons, Rick Bartram from Intercontinental Shanghai, Sean Clark from The Table and Scott Melvin from Commune Social. World-famous dessert master, Ye Wei, who placed sixth at the World Pastry Championship, and Michelin chef Jacky Xue will host various ‘chef shows’ on-site over the next three days. They will talk about UK fine dining from traditional British cuisine and afternoon tea delicacies to intricate Western desserts. Guests will have an opportunity to interact with the chefs and taste the best of British gastronomy first-hand. The best of British also features the best spirits and drinks from the UK, including world-renowned British gin, Hayman's Gin, Bacardi, Dewar's, and a selection of local craft beers. This year’s afternoon tea feast will make sure every visitor goes home ‘full’-filled.

Seeing the crowd at the opening day, John Edwards, Consul of British Consulate-General Shanghai said: ‘The British Consulate-General Shanghai, the British Department for International Trade and the Great Campaign are very happy to support the ‘Best of British.’ This is the largest showcase of British brands in China ever. We hope to showcase the innovation and exquisiteness of the UK through this event. We are also very pleased to see that there are so many Chinese consumers and buyers who’ve enjoyed the show, and activities so far.’

Mike Dynan, Managing Director of Media 10 China, said: ‘The number of visitors on the first day exceeded our expectations. This is not only an affirmation of our Media 10 team, but also the contribution of all brands, institutions, chefs, film and television, culture and fashion professionals participating this exhibition. This is the second year for the ‘Best of British’ in China. We hope that the multi-British lifestyle displayed here will attract more Chinese consumers, promote China Britain exchange and mutual benefit in trade. We also hope that the ‘Best of British’ will be taken to the next level in 2019.’

The opening day of the ‘Best of British’ was exclusively for industry professionals and VIP guests and several thousands of them filled Shanghai Exhibitor Centre. This weekend, all exhibitions and events will be open to the public. Anyone interested in British culture, brands or the UK lifestyle can find out more information about tickets here. 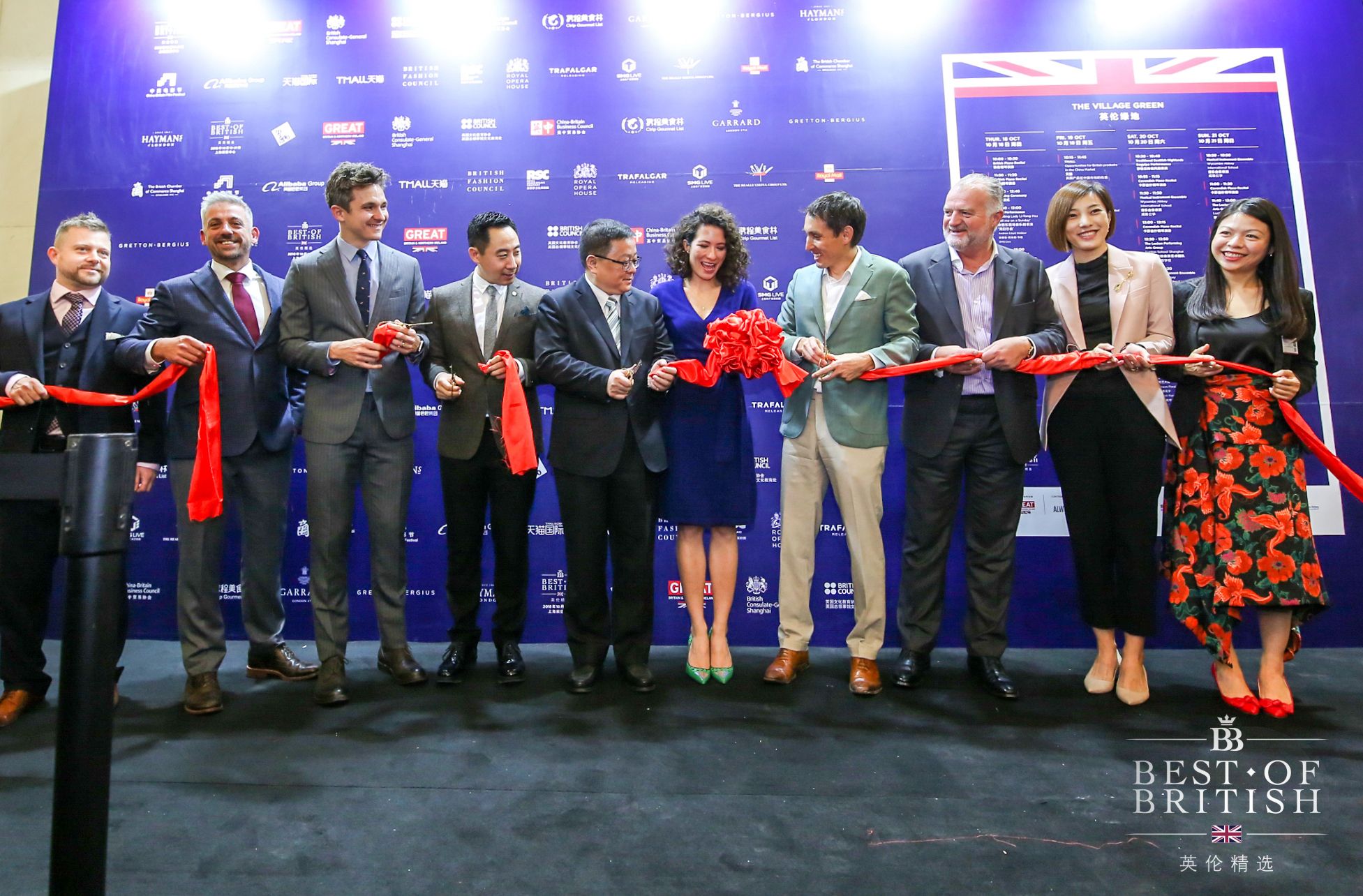