From fashion and innovation to opera and food, experience British culture and lifestyle in Shanghai

The event features 300 major brands from across UK, the event transports London’s West End, the biggest shopping district in Europe, to Shanghai. The Best of British 2018 explores the Chinese demand for premium British products and services, featuring a number of sections, including Fashion, Interiors & Design, Food, Education, Technology and Tourism. Together, they represent the timeless power of UK and celebrate British style, innovation and excellence.

The Best of British Cultural Festival will feature 200 live events, including more than 50 musical performances, 40 world-class culinary showcases, and 40 fashion shows. Over 100 experts and specialists from different industries will attend this year’s event, culminating with a presentation by an industry-leading KOL. The exhibition will not only bring together traditional high end British brands, but also a series of contemporary and inspirational live events such as the Fashion Catwalk, Taste of Britain Theatre, Village Green Performance & Events space, The Cinematic Theatre, Cream Tea Garden, and the VIP Theatre Bar.

‘As Chinese consumers recognize the significance of quality, more and more UK companies are seeing the development prospects of the Chinese market,’ said Mike Dynan, the Managing Director of Media 10 China. ‘The Best of British is one of the most important platforms not only offering Chinese consumers the opportunity to understand British products, but also allowing high-end British brands to understand the Chinese market and find Chinese partners.’

Some of the major highlights include:

Major live-recorded screenings from the Best of British Cinematic theatre will include The Royal Shakespeare Company’s latest production of Macbeth featuring International Emmy Award winner Christopher Eccleston and Niamh Cusack and The Royal Ballet’s Alice’s Adventures in Wonderland created by Tony and Olivier award winner Christopher Wheeldon, distributed by ATW Culture and Trafalgar Releasing in China, as well as  the exclusive 25th anniversary screening of Phantom of the Opera from the Royal Albert Hall, and the sequel Love Never Dies, both composed by Master of Musical Andrew Lloyd Webber. Moreover, films nominated for awards as part of the China British Film Festival will be screened each day.

The Best of British will also feature live performances from leading lady Li-Tong Hsu (徐丽东), who will be performing songs from the Chinese version of Andrew Lloyd Webber’s classic musical ‘Tell Me on A Sunday’. Show dates and times will vary, so refer to the daily schedule for the specific show dates and performance times.

The Taste of Britain Theatre will showcase a variety of British culinary classics for visitors to taste. Taste of Britain features top British executive chefs including Edward Mair from the Four Seasons, Rick Bartram from the Intercontinental, Sean Clark from The Table and Scott Melvin from Commune Social. Ye Wei, the world-famous dessert master who was placed sixth at the World Pastry Championship, will be presenting innovative British desserts onsite. Michelin chef Jacky Xue will also star in the British “Chef Show.” Hayman’s Gin, one of the world’s top spirit brands, will host a Gin & Tonic bar for guests to enjoy as well as an exclusive session on the Taste Theatre by James Hayman himself. Dewar’s, a Scotch whisky brand by Bacardi, will also be available and guests will be able to enjoy a variety of novelty British ingredients and snacks from the Artisan Market. The Plough Pub’s craft beers selection is a crowd favourite and brings the authentic British pub atmosphere to Shanghai featuring England’s oldest brewery Shepheard Neame.

A Taste of London Fashion Week comes to Shanghai

The Best of British will also host daily fashion shows at the Fashion Catwalk, featuring the latest designs from the UK. The British Fashion Council, in conjunction with Best of British will for the first time ever be bringing a selection of new cutting edge designers from London Fashion Week and London Fashion Week Mens to Shanghai. Along with the street fashion brands Boy London & Pepe Jeans London, the luxury bespoke brand Holland & Sherry, high end fashion brand Daks and heritage brand Hackett, the shows will feature a combination of British classics and pioneers. The exhibition will also feature a roundtable discussion between fashion designers, including designer Lu Kun, where they will discuss contemporary British design culture, trends and their latest design concepts. The Beauty Bar will also feature the latest British Beauty brands to enter the Chinese market

One of the World’s Greatest Jewellery Collections

Garrard, the official ‘Crown Jeweller’ of Queen Victoria and designer of the sapphire wedding ring of Princess Diana, will host the ‘Garrard Museum of Jewellery.’ This exclusive Best of British experience will showcase the luxury of last three British centuries, from Queen Victoria to Princess Diana.

The British Council's Study UK showcase will be an exciting, informative and interactive exhibition that allows visitors to explore and engage directly with a range of inspirational creations produced by UK students, alumni and academics.

Major Brands at Best of British

Visit the London double-decker bus booth for a taste of the streets of London. Learn more about the classic Cambridge bag, presented by Cambridge Satchel, a British Cambridge school bag company that has worked with iconic fashion designers like Rei Kawakubo. Enjoy British snacks and treats by McVitie's, the Royal family’s wedding cake designer. For the health-conscious, taste a variety of fruity snacks from Go Ahead, one of the UK’s leading healthier biscuit brands. The home goods company Crossing Days, founded on the famous Thames River in London, will also showcase their latest products. Additional British independent and global brands will be unveiled at the Shanghai Exhibition Centre. 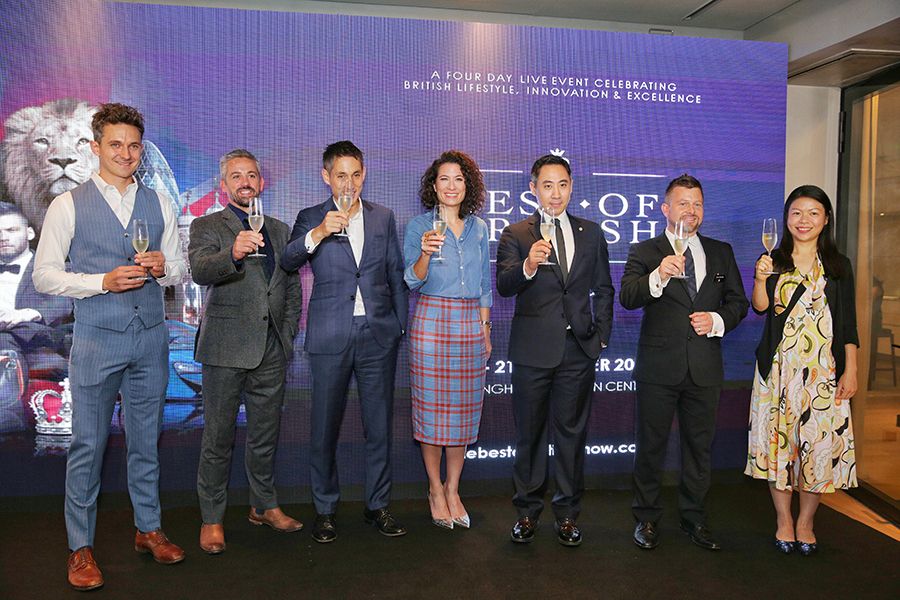